Context of the review: This review is written after 4 solo plays and 2 plays at the 2 player count. A copy of Black Orchestra was provided by the publisher Starling Games.

Adolf Hitler wasn’t cool, there I said it. He was so uncool that there were no fewer than 42 attempts on his life over the course of his lifetime. Black Orchestra aims to bring that number up, providing you with the people, tools and schemes to make an attempt on the life of one of history’s worst people.

World War II has always fascinated me, from it’s massive scope to the way in which the German people were driven to the persecution of the Jewish people and other minorities. But Black Orchestra doesn’t focus on those things, instead it focuses on a microcosm of a single element of the time period – the assassination of Hitler himself.

In general the sentiment from German Nationalists, especially towards the end of the war, was that Hitler and the Nazi Party were leading Germany down a path that could not be returned from. By the end of 1943 it was becoming obvious that there was no way that Germany and it’s allies could win the war, that there was no territory left to take and that the Allies were closing in. Thus there were numerous plots to remove Hitler from power, but these plots had to be well thought out and executed. Coming to the end of the war, Hitler and the SS had massive sway and power over everything in Germany, and the problem was that should Hitler be removed the SS and it’s constituents may well start a civil war within Germany itself.

So our scene is set… 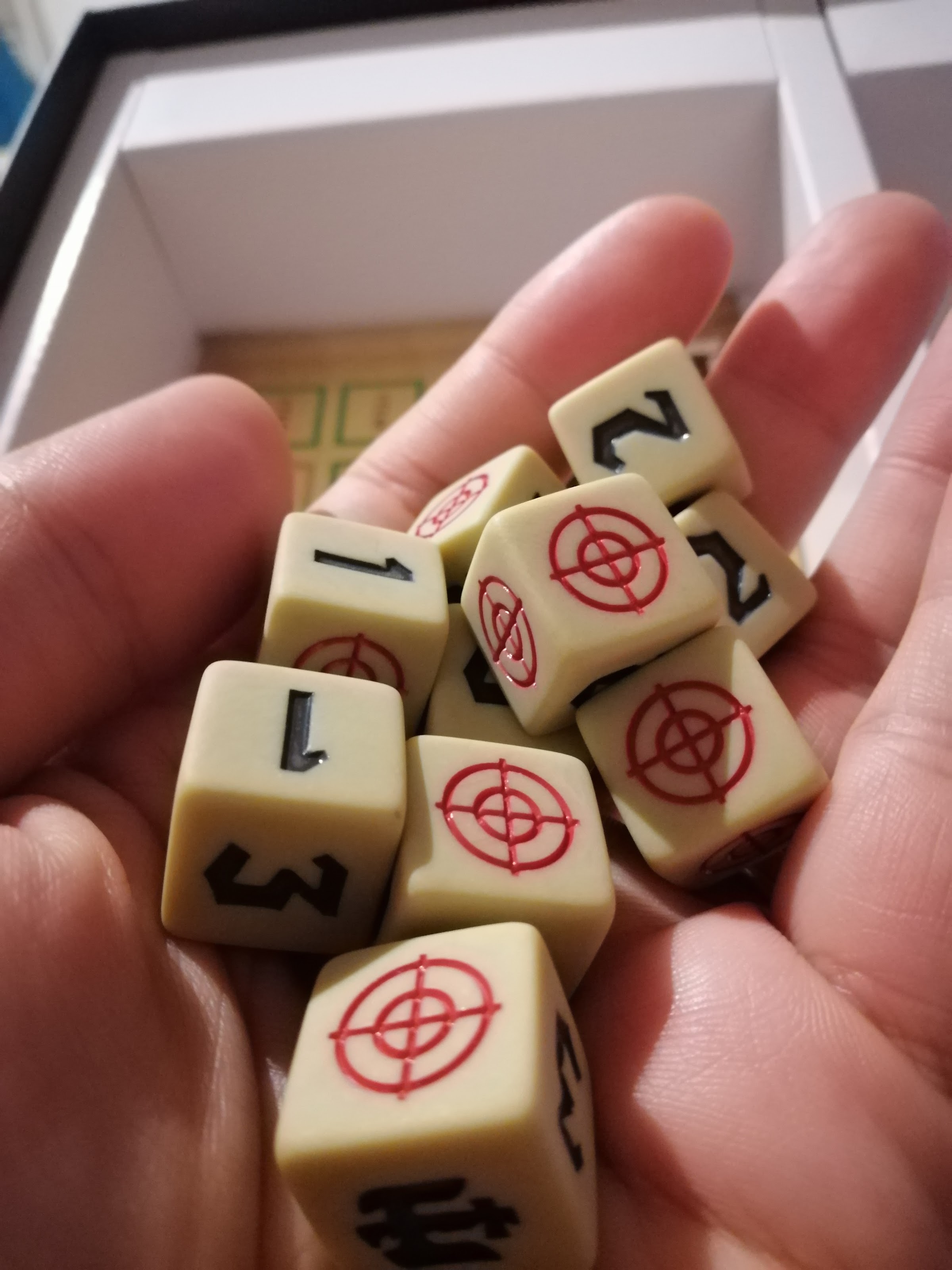 Black Orchestra shines with it’s components, not that it is flashy or over-produced, but everything seems to be just right. The mini player markers don’t cover important information, the dice are large and have a heft to them, and the player aids are brilliant.

On the player aids, Starling must pay their graphic designer more! They have somehow managed to fit the whole rule set in an additional player reference which is easy  to reference and search during the game. In addition to that, the board also very clearly outlines what your moves are and how an assassination attempt will be determined. I found that there were no questions that couldn’t be answered even on initial plays with these aids.

While theme is where Black Orchestra shines, the gameplay is not to be overlooked either. If we are comparing, I would say that Black Orchestra compares to games like Eldritch Horror, or Pandemic – an event deck is drawn from, leading to inevitable death or destruction for the players. It is up to you as players to work out how best to mitigate the current events and also be working on building your hand of cards and items in order to pull off an attempt on the life of Hitler. Make and attempt and fail and you could very well end up in a jail, and when this happens to all players it is game over.

Much like the aforementioned games, players choose some actions on their turn – take a card, movement, roll dice to conspire (attempt to gain more moves), collection and delivery of items and assassination attempts. After all players have taken their turns it is time for the Event card to be drawn, often in favour of the Axis powers, as a result players must adjust their moves accordingly to make sure that they are always a step in front of Hitler.

Unfortunately, some of the moves that you make can seem a bit arbitrary at times – you are set up for an assassination attempt, but Hitler has moved, or you are waiting for another player to deliver you something, therefore having to sit still and do not much on your turn. In counterpoint to this though, this sitting still can bring about a sense of dread you are constantly wondering what will happen next, will the next Event card foil your plans? Will you be thrown in jail? Will Hitler run again?

So while it feels that there may not be much to do, it isn’t a boring ‘nothing to do’ it is more the sweating in a hotel room wondering if the Gestapo will grab you before you have the ability to enact a plan. Play moves swiftly as well, so even if you move is minimised, it won’t be long before it’s your turn again with a different board state.

In sum, I really like Black Orchestra. It is not overly complicated, and it is exceptionally easy to get to the table with an easy set up. What really draws me though is the theme, Black Orchestra transports you to the 1940s and sticks you there, with your suitcase bomb or rifle ready to make the attempt on Hitler’s life. If you are a solo or co-op player I would highly recommend to get this one into your collection.

If you are looking for a similar action-selection mechanism but a more fantastical theme – Eldritch Horror is the game for you. Eldritch is quite similar in mechanism, but instead of fighting tyrannical monsters you are fighting cosmic monsters.

Looking for a great co-op game – games like the Pandemic series are great here, as are games with cosmic theme such as the Arkham and Eldritch Horror games.

A solo game – check out our Favourite Solo board games post from earlier this year.