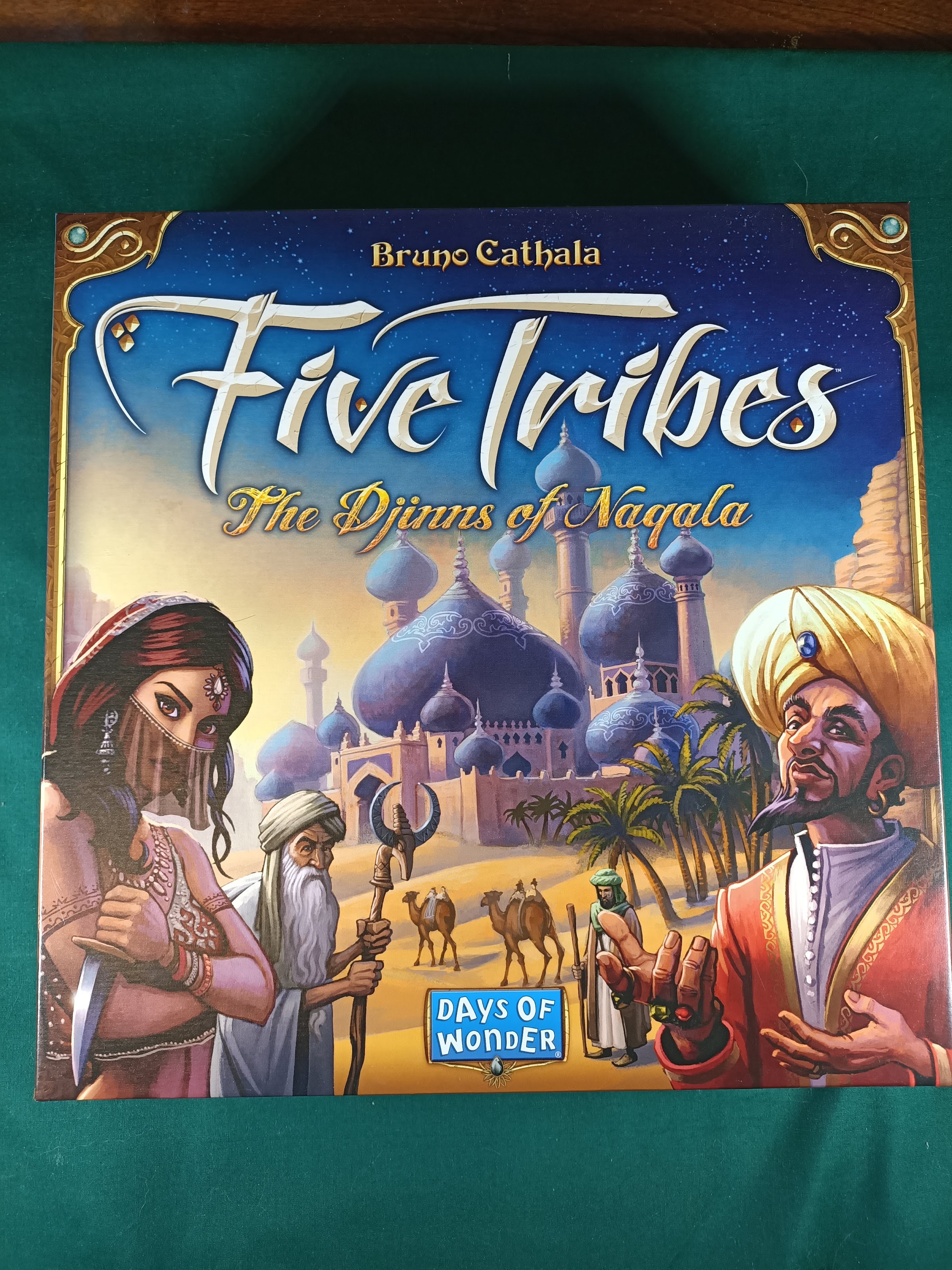 Five Tribes, like the oasis in the desert, is one of those games that is gone as soon as you see it back in stock. It may be that the love that it has been given by bigger reviewers has boosted it’s sales, or that it is just a classic of all time.

Five Tribes was released in 2014 by Bruno Cathala through Days of Wonder and is one of those rare games that has continued it’s prominence since release. I am taking a look at the game and what it brings to the table.

Overall the gameplay is simple and can be taught in a few minutes. I really hate the term ‘minutes to learn, but years to master’ but it is true of this game. Players pick up all of the meeples from one tile and move them orthogonally, placing a single meeple in each tile that they pass. The last meeple must have a meeple of it’s matching colour in the tile that it is being placed. After this,take all the meeples of the last colour placed from the last tile and take the tile action as well as any action that the coloured meeples allow.

I really love Five Tribes and have found it so easy to set up and play. No convoluted decks to set up, randomly plonk down the tiles and meeples and you are 90% there.

I played a heap of this game over the Christmas holidays, both with new and experienced players and it is so easy to teach and even more so if players have played a few modern games already.

The game can turn on a dime. Think that you have great territory and going for the win? Wait until someone unleashes a Djinn and builds a points accumulator. The ability for the game to swing like this keeps everyone involved and engaged in the game, unlike a lot of other games that have issues with runaway leaders.

I think I said it somewhere in my Hive Review, but I really dislike games that give a marked advantage to those who have played the game more. Chess is the best example of this, playing against someone above your skill level can be an infuriating process and it isn’t enjoyable for anyone. In saying this, there is a slight problem with the mancala type movement in Five Tribes and that players who have experience with this (or with the game) will have somewhat of an advantage in the game.

This isn’t an all encompassing issue, with turn order, random meeples and tile set up the degree of expertise in the game is somewhat mitigated. But I would recommend that if you are playing with new players that you identify the importance of turn order several times in the rules explanation.

The other factor is that I believe that this game really plays best with two players, even though it can go to four. The reason for this is that the time between moves starts to stretch out with additional players and there is very little you can do to strategise between turns as the board state will change significantly as players take their turns.

For some reason I seem to have avoided games like Five Tribes (others include Dominion, Istanbul, Tigris and Euphrates) in the belief that I thought that more recent games must have bettered them. But I’m not so sure of this, Five Tribes is a joy of strategic movement, take that and just all round fun. I really enjoy this one and with the easy set up it can be on and off the table within an hour. If you, like me, have avoided games due to their age then I would definitely recommend pushing back on this a little bit and checking out some games that aren’t the latest hotness.